We created Inspiring Pretty as a place collect all of the things that make life pretty as sisters, daughters, mothers, wives and women. We hope that you enjoy what you find here and find it useful for your own life.

Out With The Old 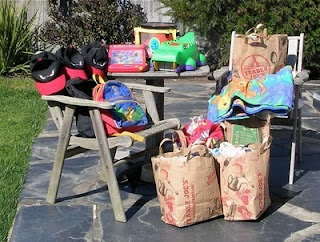 Hunting down storage space around the house has been a quest of mine since the birth of my second child. We don’t have a lot of square footage to begin with and we seem to constantly be acquiring new stuff. This is never more true than right after Christmas. We come home with our car packed to brim with new things to shove into our overstuffed house. Well, this year I decided that we were going to get out in front of this problem. After all, what good is it to have nice things if you can’t find them?

So I took to sorting through our old stuff. I do this every year, but this time I was brutal. I wanted the clutter out! Here are a few guidelines that I used to declutter my home:

So now after 2 days of purging, I emerge feeling refreshed, renewed and about 7 garbage bags of junk lighter. Sure, I may have to buy a few odds and ends that I may have been able to re-craft, but that cost is well worth the fact that I now have a clutter free house.

« 5 New Year’s Resolutions That Everyone Can KeepWedding Trends: The Photo Booth »

Be our Friend
F